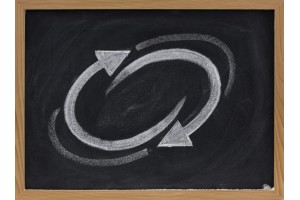 Feedback is the disturbing howling sound heard when a microphone is too close to a loudspeaker. To be more accurate; the sound being produced by the loudspeakers is being picked up by a microphone and being amplified again to a higher level than it was first received so producing an ever increasing loop of amplification.
There are a number of was to prevent this;
1. Reduce the level on the amplifier – so decreasing the system amplification
2. Increase the distance from the microphone to the loudspeaker.
3. If the microphones are directional, then point them in a different direction.

There are a number of characteristics which can lead to feedback.
1. A poor quality microphone or loudspeaker generally has a sensitivity which is not linear with frequency. Some frequencies may be much more sensitive than others; it is these frequencies where the feedback will occur.
2. Rooms will have resonant frequencies. Good performance halls should be damped using soft furnishings so this does not occur but sometimes this is not possible and halls with predominantly hard wall and surfaces are likely to cause feedback more easily.

The first plan of action to reduce feedback should be those listed first in this document, i.e. reducing the level or moving microphones. If this still doesn’t produce sufficient amplification before feedback then the careful use of electrical equipment may solve the problem.
An equaliser is a sophisticated tone control (see the workshop on graphic equalisers). This will allow many troublesome frequencies to be adjusted so they no long cause feedback. Care should be taken when using this sort of equipment as over use can make the amplified sound very artificial and often a better sound is achieved by a light use of equalisers but a reduction in level to eliminate the feedback.

When a microphone is placed close to a hole or tube then this hole or tube can produce a very specific resonance and this will cause a particular frequency of feedback. The f hole of a violin can induce feedback very easily at C#. Other similar instruments will have the same effect but at different frequencies.

Soundboards of instruments can also produce feedback. A harp for instance has a large soundboard and when the loudspeakers replay the sound of any instrument it causes this soundboard to vibrate. A microphone on the soundboard will then amplify these vibrations and could cause feedback. This type of feedback takes a higher level of sound to produce feedback as the air must cause the vibration of a soundboard to vibrate and not just the lightweight diaphragm of a microphone to vibrate. This is why a contact microphone is often the better choice when very high levels are required and feedback is often a problem.