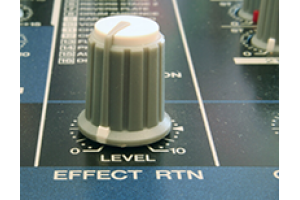 Effects Send or FXSnd is the connector that gives out the audio signal to be processed y the effects unit, it is where the signal is sent from.

Effects Return or FXRtn is the connector that receives the returned signal that has passed through the effects unit.

When the signals are integrated into one socket a stereo jack plug is used and in this case the send circuit is on one connector and the return signal is on the other.

A similar system to this is the INSERT socket. This is the same as an effects system but put in general terms. In other words, it can be used as an Effect send/return system or for any other system that the user may want to use on the audio signal. As in the Effects system it breaks the audio signal and allows the user to insert an effects or other unit before returning the signal to the mixer for further processing.