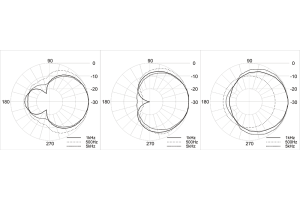 Operation of microphones.
All microphones pickup sound and convert this signal into an electrical signal which can be amplified and fed to loudspeakers. The way this conversion is performed is one method of characterising a microphone.
The first microphones worked in the opposite way to a loudspeaker. Whereas a loudspeaker is fed by an electrical signal which makes a coil of wire move in a magnetic field and hence make the speaker cone move and cause vibrations in the air which are heard as sound, in a microphone the airborne sound makes the diaphragm move. The diaphragm is attached to a coil of wire which is then made to move within a magnet field. This movement of the coil generates a voltage in the coil and this voltage is output from the microphone and fed to an amplifier etc. This type of microphone can be manufactured to be of excellent quality and many professional artists and broadcast companies use this type of microphone. One drawback is that of size; it is very difficult to make the magnet and coil system sufficiently small to allow discrete microphone positioning. It is also difficult to make this type of microphone extremely light-weight as the microphone is built round a magnet which must have sufficient size and mass to produce a good output signal. This type of microphone is called a dynamic microphone.

Later microphones were based on a capacitor. This system is much lighter weight but has other problems. A small electronic circuit is required to be built very close to the microphone, usually within millimetres. This also means that this type of microphone requires some electrical power to make it work.

The principle of operation is as follows:
A capacitor holds electrical charge; the amount of charge a capacitor holds is determined by the voltage applied to the capacitor and the size or value of the capacitor. In turn the value of the capacitance depends on its physical dimensions. A capacitor is made of two electrically conducting plates separated by some small distance usually a few micro-metres. To charge a capacitor a relatively high voltage is connected to the capacitor via a high value resistor, the voltage is generally about 48 volts and is called the polarising voltage; the resistor is generally over 1,000,000,000 ohms (1Gohm). The microphone is manufactured so
that when sound hits the diaphragm one of the conducting plates moves or vibrates with this sound. When the plate moves the distance between the plates varies and as described above this causes the capacitance to change in sympathy with the sound. As the polarising voltage is kept constant and the charge on the capacitor cannot escape due to the high value resistor, the voltage on the capacitor must change; this change in voltage is then fed out of the microphone as the signal, usually via some more electronic circuitry. This type of microphone is called a capacitor or condenser microphone; a special variety of this
type is an electret microphone. This variety differs in as much as the high polarising voltage has been replaced by a physical charge fixed into the capacitor during manufacture. Although early versions of the electret microphone were poor modern electrets can work as well as any capacitor microphone and now electrets probably represent the majority of microphone sold.
As mentioned in the previous paragraph, capacitor and electret microphones require a power source to drive the electronic circuitry and make the microphone work. This power source was originally a battery but more commonly this is supplied by phantom power. Phantom power is a powering system found in most mixer desks and an increasing number of other amplification systems which have a facility for microphone input. It is only available on microphone inputs which use balanced XLR connectors. These are three pin connectors which allow improved microphone connections and microphone circuits. The phantom power voltage was traditionally 48v but there is now a lower voltage standard of 12v which may
be found, on occasions other voltages may be found, 9, 15 or 24v are quite common.
Another aspect of the microphone input associated with phantom power is being balanced. A balanced microphone is one which has three output connections, one earth and two signal wires. The two signal wires form the balanced signal. When a sound hits the diaphragm of a microphone the voltage on the one of the output wires rises whilst the other falls, making the two signals equal and opposite or balanced. This has an advantage in that if the cable connected to the microphone is subjected to interference this interference will affect both signal wires in the same way. When the microphone signal reaches an amplifier with a balanced input, the amplifier amplifies the difference between the signal wires. This
means that the wanted signal, which is opposite on the two wires, is amplified but the interference signal, which is the same in the two wires, is not amplified and so the signal passing through the amplifier to the loudspeaker is interference free. This balanced system is used on dynamic, condenser and electret microphones.