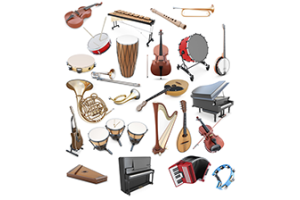 Amplification of Acoustic Instruments
The present trend towards the revival of acoustic instruments as opposed to so-called electric instruments is directing attention to the problems inher¬ent in the amplification of non-electric instruments whilst retaining the acoustic quality of the sound.
This problem first arose in the "speak-easies" in America in the early days of the Blues and Jazz when musicians found that their acoustic instruments could not be heard over the hubbub in the venues they were playing.  At that time the technology available allowed only one solution.  The instruments had to be fitted with steel strings so that the vibrations could be detected using a simple electromagnetic coil.  The signal produced by this coil was then amplified and fed to a suitable loudspeaker.  The resulting "electric" sound became a characteristic of amplified music.  The guitar leant itself to this technique probably better than any other instrument and, eventually, the instrument became "solid-bodied" since the soundboard and cavity of the acoustic guitar played no significant part in the final sound.  The "acoustic" players disapproved of this sound to such an extent that "pick-ups" were not permitted at their gatherings.  One well-known Blue-grass banjo player is reputed to have kept his instrument padlocked in the case, when he started using a pick-up, for fear of being banned!
Technology has now progressed to the point where it is possible to amplify acoustic instruments and retain their characteristic sound.  The specific methods employed depend on the particular instrument and the basic principles are outlined below.

General
Amplifying a musical instrument would seem to be simply a matter of placing a "regular" microphone in front of the instrument.  There are, however, many problems with this simple technique.
1.  At relatively modest levels of amplification "feed-back" or "howl-round" occurs which is difficult to control without sophisticated elec¬tronic equipment.  This is especially troublesome if, as is generally the case, the musicians demand "on-stage monitoring" so that they can hear them¬selves play.  In fact for optimum results the acoustic properties of each venue must be accommodated by equalising the room before attempting to "mic" the instruments.  This can now be done using the latest automatic graphic analysers, which are available at very reasonable prices.  This approach will be the subject of another article.
2.  Traditionally, groups of musicians, when playing together, have used in¬struments that are compatible in terms of the acoustic sound quality and volume, such as consorts of violins or recorders.  The trend for some time has been for groups to use instruments that were never intended to be played to¬gether.  For example, one band uses saxophone, hurdy-gurdy, drums and electric bass guitar.  Clearly it would be difficult to produce a balanced sound if these were to be played acoustically and it presents some problems to the sound engineer when the group is amplified.
Because the in-built acoustic qualities of the instruments do not result in a satisfactory blend then placing one or more "regular microphones" in front of the group will not necessarily help the sound engineer to resolve this problem
What is required is some method of achieving acoustic separation between the instruments so that a satisfactory blend can be produced.  It would appear that there is only one way to do this.  A range of special "transducers" is required so that each instrument can have a dedicated transducer.  This raises individual problems that are addressed below.

Specific Instruments
Acoustic Instruments can be divided into two categories according to how the sound vibrations are initiated and acoustically amplified.
1.  Stringed Instruments.
The sound originates in the vibrations induced, by bowing, plucking or striking tensioned strings and is then amplified by means of some sort of sound- board.  The main body of the sound emanates from the soundboard and the sound-hole but the characteristic sound of a particular instrument can depend, to some extent, on the presence of the higher frequencies that radi¬ate directly from the strings,  e.g.  fiddle, guitar, piano, harp, dulcimer, kora.
2.  Wind Instruments
These are of three distinct kinds.
a).  The sound is produced by the vibration of a reed of some sort, which can be controlled by the mouth.  In this case the reed itself makes a significant contribution to the final sound, which is due, mainly, to the column of air, which is induced to vibrate in resonance with the reed,  e.g. clarinet, saxophone, oboe.
b).  The sound is produced by vibrating the lips, as in the trumpet, or from the eddy effect produced by blowing at the edge of an opening in the body of the instrument, as in the flute, recorder or pan-pipes.  In both cases the characteristic sound, although not the tonal quality, is largely in¬dependent of the vibrating source and the main distinction is between open columns (flutes) and closed columns (pan-pipes).
c).  The sound is produced by the vibration of so-called "free-reeds" mounted in banks and set in motion by forcing air past them.  This is done by either blowing (mouth-organ, melodica) or pumping (accordion, concertina, bag-pipe) the air.  The characteristic sound is due to a combination of the reed and the small chamber in which it is mounted.

Specialised Microphones for the above instruments.
1.  Stringed Instruments
Until recently all that was available for use with stringed instruments, apart from regular microphones, were the various forms of crystal ceramic contact microphones.  These all suffered from the disadvantage that they re¬ceive signals from only a small area of the soundboard.  One manufacturer even claimed that if its "bug" were placed on the "sweet spot" of the instru¬ment then it would reproduce the acoustic sound of the instrument over all frequencies.  An investigation of the modes of vibration of the soundboard of any stringed instrument will show that the patterns of vibration differ enormously according to the note being played.  Unless, therefore, the "bug" is of a peripatetic nature it will not have much chance to do this.  More re¬cently strip microphones, that receive signals from an extended area of the soundboard, have become available in both electret and piezo form.  Either of these, in conjunction with an appropriately placed miniature electret capsule, will give a very good reproduction of the instrument.  More control¬lable results can be obtained by using a strip microphone alone but with a two-band parametric equaliser.  With the latter tuned to the respective fre¬quencies of the sound-hole and the soundboard.  It is possible to reproduce the characteristic tonal balance of the instrument.  This facility is par¬ticularly important for the guitar.
2.  Wind Instruments.
a.)  In these instruments the sound radiates from the reed itself, the bell end and also from the fingering holes.  Ideally, therefore, the best solution would be to have a combination of microphones that will receive a signal from all three sources.  This could be done using fixing devices to mount miniature condenser microphones at appropriate points.
b.)  Apart from the absence of a reed these are similar to a) and the solu¬tion is a dedicated set of miniature microphones and mounts.
c.)  These instruments have either bass and treble, or left and right sides.  To control the desired balance it is essential to mount two or more micro¬phones at a suitable distance from the reeds.  This is critical so that the physical spread of the reeds is covered but without the microphones be¬ing so close that the sound pressure level, which can be very high, over¬loads them.
Miniature condenser microphones are, generally, omni or uni directional, meaning picking up from all directions or concentrated on sound at the front of the microphone.